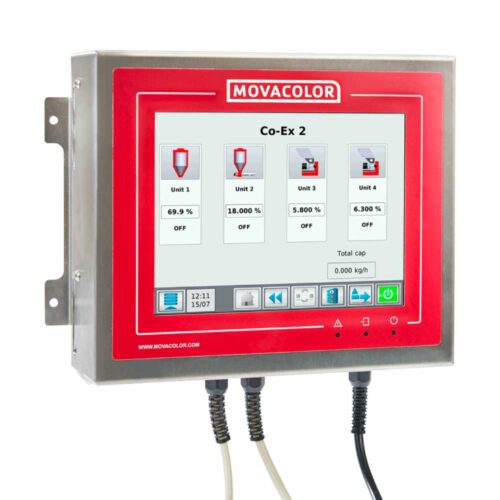 The MCTC 8 inch touch screen controller plays an important role in the reliability and stability of the dosing process.Read more

Try for free
Request a quote

he MCTC 8 inch touch screen controller plays an important role in the reliability and stability of the dosing process. The robust, easy to start-up (and operate) controller works under all circumstances in injection molding and extrusion applications.

Standard available in 19 different languages, the intuitive user interface of the MCTC ensures that anyone can operate the connected dosing system(s) without extensive training.

With numerous features such as: quick calibration, recipe storage, manageable user levels, EBM synchronization and sensor neck control (more being added freely on a regular basis) at your disposal, the gravimetric controller is truly a flexible controller that grows with your (Industry 4.0) needs.

Also available as a remote controller.

Out-of-the-box installation: Start working more efficiently quickly. This unit is easy to install and supplied pre-configured. Can be operated without extensive training together with the MCTouchscreen controller.

Want to connect with other machine controllers or central monitoring systems? No problem. This unit is prepared to communicate via different protocols such as OPC-UA and Profinet.

This website uses cookies to improve your experience. If you continue to use this site, you agree with it.