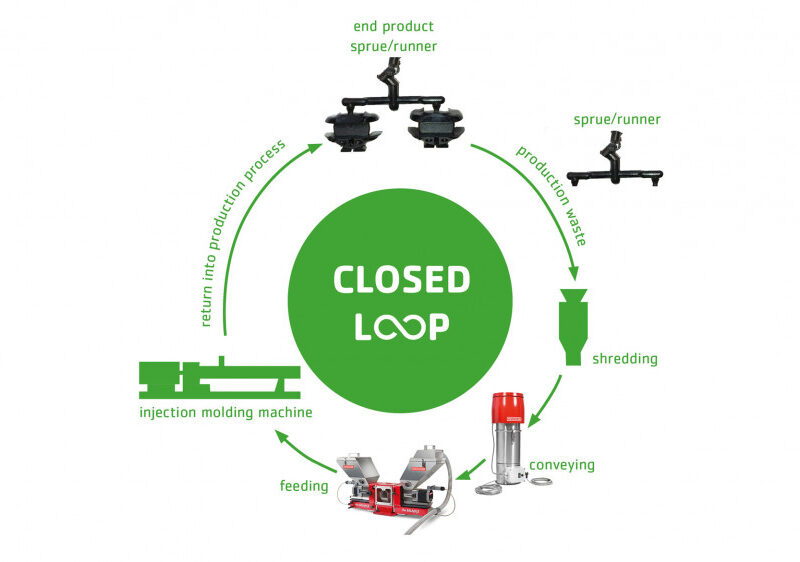 Making a contribution to the circular economy is becoming increasingly important for companies around the world. Corporate social responsibility, sustainability and recycling are powerful terms that you often come across. But can you — as a producer of plastics — also do your part here? And, if so, then how? In this blog I will briefly explain what ‘circular economy’ means and how you can immediately start producing sustainably by using in-house recycling.

The circular economy extends the life cycle of products

In our economy, there are two models that describe the life cycle of a product: the linear model and the circular model. The linear model follows the traditional phased plan of “take – make – dispose.” In these steps we collect raw materials, shape them into products that we use, and then discard the products as waste. In a linear economy, we create maximum value by producing and selling as many (often inexpensive) products as possible.

The circular model follows the 3R approach of “reduce – reuse – recycle.” This approach focuses on using as few raw materials as possible (reduce), re-purposing products and components as much as possible (reuse) and/or using the raw materials of a product afresh in the highest quality possible (recycle). In other words: use, share, lease, reuse, repair and recycle existing materials and products as long as you possibly can. This extends the life cycle of the product and creates added value.

By implementing in-house recycling, plastics producers can contribute to the circular economy in a relatively easy manner. After all, these producers deal with plastic residual waste — in the form of sprue, runners, and tops and tails — from the injection molding machines and extrusion blowers on a daily basis. Previously, this waste was often sold to buyers who then used it to make low-quality plastic products. Nowadays, this residual waste is more often reused by directly and indirectly recycling it. This is called recycling in a closed system (closed loop) because the waste does not leave the factory. It provides various sustainable and financial benefits, such as reduced transport.

You can recycle in-house in two ways: directly and indirectly. Direct recycling occurs right at the injection molding machine or extrusion blowing machine by shredding the production waste with a grinder and re-introducing it into the production process. This process is fully automated and closed. With indirect recycling, the residual waste is collected in a central container in the factory, shredded centrally, and then reprocessed into an end product. In short, we can identify the following main differences between these two types of recycling:

Differences between direct and indirect recycling

Direct recycling in combination with a ratio valve or regular batch blender is less accurate when compared to the other systems, because here the main material and the regrind are layered on top of each other. Other options are volumetric dosing systems, gravimetric dosing systems and hybrid gravimetric blenders. Because these systems dose the regrind into the main stream inline, the result is not layers but precisely the correct mix between main material and regrind.

As you have read in this blog, in-house recycling with the right equipment is easier than you think. To express this in hard figures: when the system uses 20% regrind, you can save as much as 20% on your masterbatch and, with the current high raw material prices for plastic, that can provide substantial cost savings. It’s also sustainable, so you’re able to make a valuable contribution to the circular economy. When you think about it, that sounds great, doesn’t it?

Working in a cleanroom is balancing between the highest standards

The 5 reasons why the MCNexus is one of a kind

Do you know the definition of a specialist?

More news
This website uses cookies to improve your experience. If you continue to use this site, you agree with it.